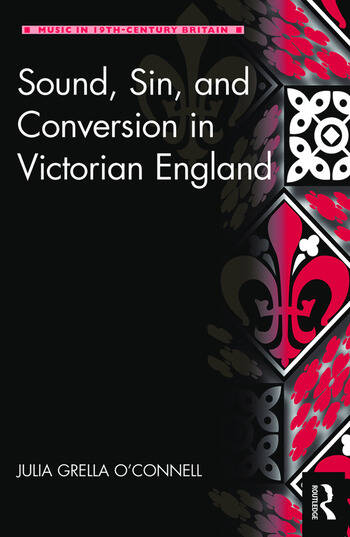 The Diana McVeagh Prize Committee, charged with selecting the Best Book on British Music published in 2017 and 2018, is delighted to announce that this year’s prize is awarded to Julia Grella O’Connell for her volume, Sound, Sin, and Conversion in Victorian England, published in 2018 by Routledge. The Committee especially commends Dr. O’Connell’s interdisciplinary scholarship, which traverses visual art, literature, theology, and music with great skill, and is delivered in exceptionally refined and lucid prose. Through her focus on the trope of the ‘fallen woman,’ Dr. O’Connell demonstrates–among other things–how images involving Saint Cecilia or Mary Magdalen informed Victorian perceptions of music’s moral agency. -North American British Music Studies Association

“The plight of the fallen woman is one of the salient themes of nineteenth-century art and literature; indeed, the ubiquity of the trope galvanized the Victorian conscience and acted as a spur to social reform. In some notable examples, Julia Grella O’Connell argues, the iconography of the Victorian fallen woman was associated with music, reviving an ancient tradition conflating the practice of music with sin and the abandonment of music with holiness. The prominence of music symbolism in the socially-committed, quasi-religious paintings of the Pre-Raphaelites and their circle, and in the Catholic-Wagnerian novels of George Moore, gives evidence of the survival of a pictorial language linking music with sin and conversion, and shows, even more remarkably, that this language translated fairly easily into the cultural lexicon of Victorian Britain. Drawing upon music iconography, art history, patristic theology, and sensory theory, Grella O’Connell investigates female fallenness and its implications against the backdrop of the social and religious turbulence of the mid-nineteenth century.”

The book is available for purchase here

View all posts by Chelsea Lane →