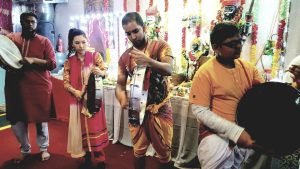 As is customary, the GC’s Ethnomusicology Program had an impressive presence at the 2019 SEM Annual Conference in Indianapolis in November. Seven students presented papers, and two others participated in panels. Prof. Peter Manuel also presented a paper, and Prof. Sugarman participated in a roundtable. The papers were as follows:

Elaine Sandoval: “Making Space in the State: Música Llanera and the Spectacular in Venezuela’s El Sistema”

Roundtable participants were the following:

In other news, GC student Agustina Checa was awarded the 2019 Hewitt Pantaleoni Prize for the best student paper delivered at the annual meeting of MACSEM, the Mid-Atlantic Chapter of the Society for Ethnomusicology.  Her winning paper was entitled “Reclaim the Album as an Oeuvre:  Artisanal Cassette Production and Musical Value in Argentina.”

Bradford Garvey: “The Gift of Rule: The Politics and Performance of Legitimacy in the Sultanate of Oman”

George Murer: “The Performance and Patronage of Baloch Culture through Music (and Related Arts) in the Eastern Arabian Peninsula”