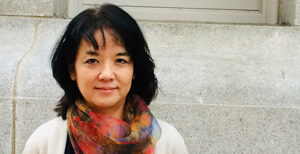 This summer Ellie Hisama (Ph.D. ’96, Music) is planning a major move — after close to three decades in New York City, she is leaving to assume her new role as dean of the University of Toronto’s Faculty of Music.

Hisama was a professor at The Graduate Center and at Brooklyn College, where she was also the director of what is now the H. Wiley Hitchcock Institute for Studies in American Music. She is currently in her 16th year at Columbia University. A renowned scholar in music theory — a field that remains largely white and male — her work focuses on ethnicity, gender, sexuality, culture, as well as composers who have been overlooked within the mainstream canon. (These two interests, Hisama points out, are closely related.) She is also dedicated to the work of engaging with local communities, and founded For the Daughters of Harlem: Working in Sound, a program that brings public high school students to Columbia to create and record their own music. Hisama recently spoke to The Graduate Center about the challenges of increasing diversity in her field and her hopes for her new role:

The Graduate Center: You’ve explored equity, diversity, and inclusion issues in your field since the 1990s, far ahead of the current movement. What sparked your interest?

Hisama: I was always a feminist, even as a child. I just thought that women and men should be equal, and observed that this wasn’t happening around me.

At The Graduate Center, I took a course that was beyond the required six semester sequence, and one of the pieces [we studied] was by the composer Ruth Crawford Seeger. It made me suddenly realize that there were pieces by women composers, and I started to search for other pieces by other women composers. [Distinguished Professor] Joseph Straus gave me a tutorial specifically on feminist theory and music theory.

GC: What goals do you have in mind for your new position?

Hisama: It seems one thing that the U of T Faculty of Music is really interested in, based on my conversations with them, is diversity, equity, and inclusion. They’re really eager to have leadership from the administrative side, not just from the student side and from the faculty side. So that’s a high priority.

It’s going to take some careful thought, because first, I’m an outsider to the institution and second, I’m not Canadian, so I have to do a lot of listening and figure out what the priorities and contexts are. I’ve also found that there’s a lot more attention to indigenous peoples than I see here in the United States. So that’s something I’m also trying to learn about through careful study and engagement with many people. I have a lot of plans but I want to work carefully, and not just change things for the sake of change.

GC: What challenges do you see in the field of music theory, in terms of diversity, equity, and inclusion?

Hisama: Now is a period when we see and hear a lot of calls for change. But there is also a lot of pushback, because [change] requires rethinking a lot of the assumptions we have about the field, and not everyone is in agreement that there should be such wholesale change or about how to go about it.

I think there is really a need for music studies to reckon with its past. Music theory specifically has been a heavily white field. The percent of women in the Society for Music has remained in the low 30s for decades; it has not really moved up in comparison to sister disciplines like musicology and ethnomusicology. Music theory is singular in the music subdisciplines in its lack of gender diversity.

GC: What advice do you have for graduate students who are starting out in the field?

Hisama: Definitely find a mentor, and maybe more than one. It’s critical to find someone who will show you the ropes and tell you how to navigate difficult situations.

It was important for me while I was a student at The Graduate Center to have studied outside the music program. I took two seminars in the English department, one with [Professor] Michele Wallace, and that was really a life-changing experience for me because she focused on African American modernism and we went over so many interesting texts and films. To study with her was transformative, in seeing how she taught — specifically as a woman and as an African American scholar. I didn’t want to study only with white male faculty members as I had to do in the Ph.D. program in music theory, which had no non-white or women faculty at the time. What I learned from her has shaped what I do today.

If you find there are limitations in your own program, [taking a course in] another discipline and seeing how other disciplines deal with diversity or non-diversity is really helpful. I attended the 2019 conference on Black Women Philosophers at The Graduate Center, which I thought was excellent. If you remain only in your home discipline, you can get stuck in the same conversations articulating the same positions.

GC: Professor Stephanie Jensen-Moulton (GC/Brooklyn, Music), who is also a Graduate Center alumna (Ph.D. ’08, Music), says you’ve been her mentor and were “instrumental in changing the course of my career from opera singer to feminist musicologist. It’s not an exaggeration to say that taking Ellie’s class literally changed my life.” What do you see as the role of mentorship and teaching in your career?

Hisama: I struggled in graduate school, but I managed to have a career doing what I believe in doing. I think it’s important to shift the course of music education toward greater equity when you have a job as a faculty member, or if you have tenure or you chair the department.

I know what it’s like to be a graduate student: You’re very vulnerable. I actively mentor students, and even when I was fresh out of my Ph.D., students would call me for advice, and ask what should I wear to my job interview, and how do I interview? They asked me because they needed help with the practical aspects of preparation. I continue to do a lot of professional mentoring, because I know what it’s like to have no one to turn to for advice who has shared your lived experience.

Mentoring is often invisible labor taken on by women or people of color. Columbia just started a faculty mentoring award, which I was humbled to win last year. I think a lot of women faculty take on this work because we see it as necessary to surviving in a field that is often not really set up to support work by women, women who are mothers, or BIPOC scholars.

We also asked Hisama about the hip-hop music class that she started at The Graduate Center and is now a popular class at Columbia. She shared its history:

Hisama: That course came about from a course but I taught at The Graduate Center in the early 2000s on popular music and the politics of culture. I thought I didn’t know enough to teach hip-hop, but I thought it was really important in a class that addresses politics and culture to include it.

So I very tentatively included one week on hip-hop and I had a wonderful student whose name is Jonathan Gray(Ph.D. ’06, English), who was getting his Ph.D. in English and is now a professor at John Jay and The Graduate Center. He had taught hip-hop at a high school. I learned so much from him. With that class, I gained enough confidence to teach an entire seminar on hip-hop at The Graduate Center, and we published a volume of essays written by the students, called Critical Minded[co-edited by the recently featured Evan Rapport(Ph.D. ’06, Music)].

I wanted to transform this doctoral-level class into a course for undergraduates, and so this course called Listening to Hip Hop was born. And it’s offered by the music department, as opposed to English, African American Studies, sociology, etc. Because I wanted to be firmly focused on hip hop as music. A lot of people get attracted to the lyrics and lyrical analysis, but there’s so much music ⎯ the sound of the voice, the beats, and production.

It’s a delight for me to teach this class because I teach students from other departments whom I would not meet normally. Music theory doesn’t draw a lot of women, which always frustrates me, but this class is about half women and is diverse across many identifications. It’s a class that people feel they can take starting with zero knowledge.

View all posts by Gregory Hartmann →