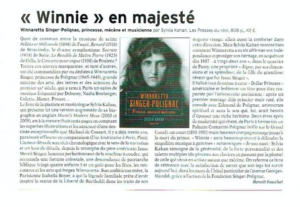 What do Fauré’s theater music for Pelléas et Mélisande (1898), Stravinsky’s Renard (1916), Satie’s symphonic drama Socrate (1918), Falla’s El Retablo de Maese Pedro (1923) and Poulenc’s Organ Concerto (1938) have in common? All of these remarkable works, and many others, were commissioned by or dedicated to Winnaretta Singer, Princesse de Polignac (1865-1943), the great early 20th-century patron of the arts, letters and sciences, who held a music salon in Paris frequented by, among others, Debussy, Nadia Boulanger, Colette, Monet, and Proust.

The book by the pianist and musicologist Sylvia Kahan, an expanded version of her English-language biography Music’s Modern Muse (2003, 2009), is exceptionally long and rich (800 pages, including superb illustrations and annexes), making Michel de Cossart’s book (Une Américaine à Paris, Plon), written thirty years ago, seem, in comparison, like a mere sketch. The author tells the chronological story with narrative drive and a wealth of details, beginning with the triumph of Winnaretta’s father, Isaac Merritt Singer, the lucky of the sewing machine, who accumulated a colossal fortune, a progeny of biblical proportions (twenty-four children!) and a taste for parties, society, and the arts that helped to form Winnaretta’s personality. Her ambitious mother, the Parisian Isabella Boyer – whose features, according to family legend, were the inspiration for the august visage of Bartholdi’s Statue of Liberty – also helped to orient Winnaretta in this direction. But Sylvia Kahan shows quite well how Winnaretta knew, from an early age, how to affirm her independence and to protect her inheritance, by acquiring, in 1887 – at age 22 – a piece of property in Paris’s Passy district “of a size and splendor befitting the daughter of a dreamer of grandiose dreams: Isaac Singer.”

But this “Dollar Princess,” an American and a lesbian, still needed a title in order to be respected by the Paris aristocracy. After a short-lived marriage to one prince, she tied the knot with Edmond de Polignac, a witty but penniless aristocrat who needed to marry a wealthy heiress. These two lovers of modernity lived – in Paris and Venice (where a Palazzo Contarini-Polignac shone on the Grand Canal) – in brief (1893-1901) but happy companionship until the death of the prince. “Winnie” worked hard to advocate for the odd music based on octatonic scales written by her husband. Sylvia Kahan testifies to the generosity, the strong personality and the multiple talents (as a painter, pianist and organist, and writer) of this woman who lived as both an artist and a patron. One finishes this work of reference with the satisfaction of knowing that her legacy survives her today, inside the walls of her mansion on Avenue Georges-Mandel, thanks to the activities of the Fondation Singer-Polignac.

View all posts by Chelsea Lane →